The Most Potent Instrument?

As the latest educational trends come and go, Director of Music, Dr Rachel Milestone writes about the impact of music on wider educational skills.

Since the beginning of formalised education, governments, governors, educators and psychologists have promoted the latest learning initiative; ideas that promise to turn every child in the school into an engaged and achieving academic.   According to the education website ‘Teach Thought’ the five most popular trends in 2020 were:

They go on to outline 30 other types of ‘Learning’ that are considered potentially revolutionary in moulding our current pupil body.  So why is it, when such trends are lapped up by educational leaders, that an initiative that has been proven time and time again to have significant benefits when it comes to teaching, learning and pupil outcomes, is so often ignored?

Multiple research projects have proved time and again that regardless of background, gender, ethnicity, or prior learning in Science, Maths and English, students who start learning a musical instrument before the age of 11, and continue to play in senior school, not only score significantly higher grades but were about one academic year ahead of their non-music peers with regard to their English, Mathematics and Science skills. It has also been pointed out that Nobel Laureates in the sciences were more likely to have a musical hobby than other people (including other scientists).  Any internet search, any browse through back copies of the TES or educational psychology journals, will highlight numerous studies, articles, and blogs on this topic, both current and historic, as far back as Plato.

In addition to this many believe that music should be promoted in education simply because it’s music.  Rather than defending music as a great tool for raising exam marks and making pupils ‘smarter’, music is also an enricher of pupils’ lives and it is important to teach the arts for their own sake.   During lockdown it was the virtual trips to art galleries and museums, streamed concerts, operas and shows, virtual choirs and orchestras, that enriched lives.  If we don’t want to live in a world without music, even in the hardest of times, why would we want to have a school without music?  Music helps us to connect with some of our more complicated feelings.  Making music helps us to link with each other through choirs and ensembles, fostering cooperation, collaboration and connection between pupils Music, according to Plato writing in the fourth century BC, ‘gives a soul to the universe, wings to the mind, flight to the imagination, life to everything’.   Why then, in the twenty-first century AD, are we having to fight to keep music and the arts alive in education?

Music is constantly under threat of being removed from schools altogether, both in academic and practical terms.  A recent report by the All-Party Parliamentary Group for Music Education found that the implementation of the English Baccalaureate (EBacc), has had a significant negative impact on music education in schools in England. Curriculum time for music (which is statutory for Key Stage 1–3) has reduced, along with opportunities for children to pursue music to GCSE and A Level. The Department for Education’s own data shows a fall of over 20% in GCSE Music entries since 2014/2015. Recent findings from the University of Sussex highlighted that some pupils have little or no music education during their entire secondary school career, with the result being that music becomes the preserve only of those that can afford to access it outside of the classroom.

This leads us to the serious and distressing possibility that, if the decline continues, instrument-learning and music-making will eventually only be accessible to those pupils whose parents can afford to pay for it.  It is indeed the case that music in most private schools continues to flourish.  Here at Leweston School, for example, GCSE and A-Level numbers have also been hit by a focus on EBacc subjects at KS4 and KS5 level, but music-making is still actively promoted and encouraged.  Here, every child from Nursery to Year 9 has a weekly classroom music lesson.  Every child in the Prep and Senior School has the opportunity to sign-up for instrumental lessons, to sing in a choir, to play in an instrumental ensemble, whether they think they are musical or not.  Music at Leweston is about encouraging those who naturally excel and want to do it, but also those whose musical talent needs nurturing – those who don’t know they can do it yet!  And this is promoted by the decision-makers of the School because they can see how transforming music participation can be for a child.  Why should this only be available to those children whose parents can afford to pay for it?  If it is scientifically and empirically proven that participation in music-making during a child’s school career can help develop keen listening skills, develop team skills, develop discipline, and just simply enrich their lives, should regular music participation not be mandatory in all schools?  When studies show that frequent involvement in music enhances the learner’s cognitive capacities, executive functions, motivation to learn in school, and self-efficacy, should Music not be recognised as a revolutionary educational initiative?

Such questions remain unanswered, but perhaps the future of music in education may not be so bleak after all.  In January 2020 the Government announced £85m to fund school Music Education Hubs, which will provide opportunities for pupils to learn an instrument, perform in a choir, or join a band.  In March 2021 the Department for Education published a model music curriculum ‘to help schools deliver world-class teaching […] to support all children to have access to high-quality music education’ (gov.uk).  We have to hope that announcements such as these continue, otherwise who are the professional musicians of the future?  Perhaps only the privately educated.  Will it be possible for a working-class, comprehensive-school educated girl from Greater Manchester to become the Director of Music of a Private School in Dorset?  And, perhaps most importantly, how will those who think they can’t, find out that they can?  As a musician, teacher, and advocate of the transformatory powers of music and the performing arts, I long to see the day when music education is understood as a necessity, not a luxury; when music is funded without question or the need for constant justification.  The afore-mentioned Plato said, ‘Music is a more potent instrument than any other for education’.  If only the decision-makers in education agreed. 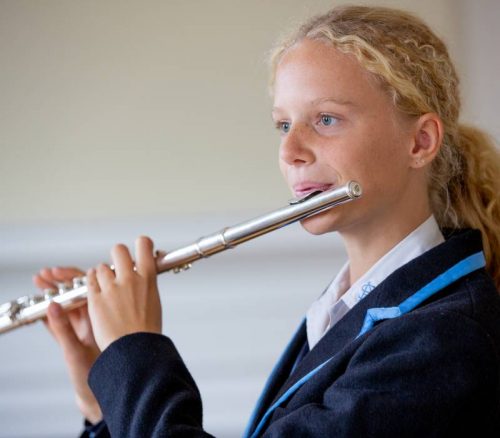