Our boarders had a very exciting time at Dorset Paintball at the weekend.

The students played in the woodlands and two other zones where they had to ‘capture’ a helicopter and a tank! The pupils played four games in two teams (Blue and Red). The Red team were crowned the victors!

One of our boarders, Nicolas G-G, Year 7, has written about his paintballing experience:

“This weekend I went to Skirmish, Dorset Paintball. It was forty minutes away in the minibus. We had to drive along a very bumpy track to find the Paintball base. It was hidden inside a dark woods with lots of scary signs telling us it was a ‘quarantine zone’.

Two teachers came with us: Director of International Students, Miss Quick and Assistant Housemistress, Miss Robinson. They drove us in the minibus. There were non-boarding students as well as the usual boarding crew. Most of the Year 11s and Sixth Formers wimped out but those of us that braved it had an amazing time!

One of my favourite parts of the paintballing was in the second round because we had to defend our position in the chopper. Red team managed to hold on to our position inside the chopper, with all my group ‘killing’ everyone who tried to enter. Then another part that I really liked was when we went to the forest because I was good at attacking with Miss Quick. We were hiding behind small wooden fences but creeping up on the blue team, picking them off one by one.

The paintball guns were amazing because they had compressed air canisters, so the paintballs went super-fast. We watched a safety video where they told us to never take our masks off until we were in the safe zone.“ 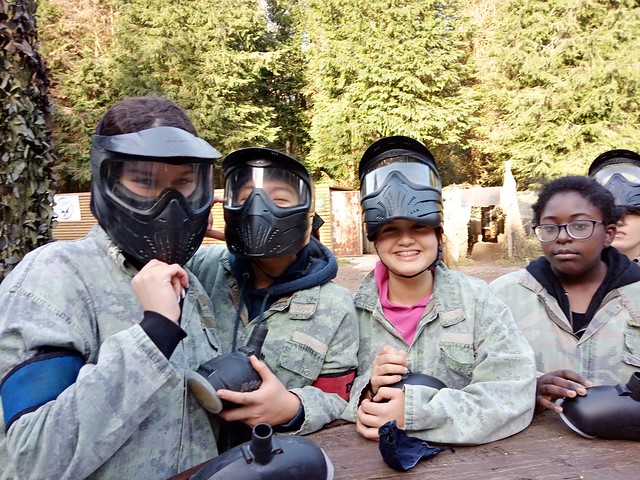