Prep 1 and 2 have been learning about the Great Fire of London and on Thursday 10 March, had a London fire WOW day! This is the WOW day that was postponed from before half term, on the abnormally windy day!

All the pupils came dressed up in Tudor costumes and participated in fire related activities. They spent the morning learning to dance like Tudors, in their fantastic costumes and then worked in groups to make Tudor houses out of recycled cardboard boxes.

Teacher Assistant, Mrs Bourne, then gave a talk about her time as a Firefighter! Mrs Bourne was with Somerset Fire Service then Devon, and then Somerset Fire and Rescue for 13 years.

In the afternoon, Reception joined Prep 1 and 2 to line up by Miss Philips office, all the way to the walled gardens where each pupil had to pass a bucket of water to each other to where the previously made Tudor Houses would be set on fire. Four buckets of water were passed down the line, ready to be used to put out the fire. Mrs Bourne then carefully set the Tudor Houses on fire and the pupils had to guess which side would light the quickest and why.

After all the Tudor houses had finished burning, four pupils were chosen to carefully help Mrs Bourne pour the buckets over the remains of the fire. 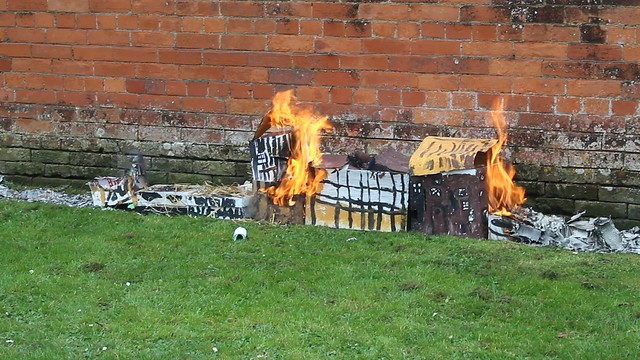