On Saturday 26 March, 81 very excited students gathered at Leweston School for the departure of the 2022 Austria Ski Trip. For some, this was their first time going skiing, for others, this was their first time in two years since going abroad. The feeling of excitement and apprehension for the upcoming journey was intense! Mr Cannon, activities lead, shares an insight to Austria Ski trip below. 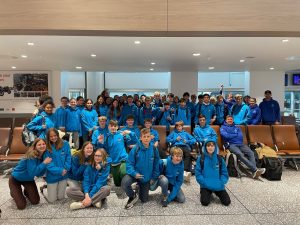 After the journey, (where one group flew from London and the other group flew from Bristol) both groups arrived in Flachau safely. We were greeted by the Travel Representatives and our lovely youth hostel (Stadler Hostel). Much to the students appreciation, the notorious ‘Penny Markt’ was directly opposite the Hostel, allowing students to purchase some snacks. The pupils were then kitted out with their boots, skis, helmets and poles that were ready waiting for us. The students then had opportunity to explore the large hotel that had a disco room, games room, sports hall and cafeteria. However, most of the students decided to sunbathe and enjoy the panoramic views of the Alps. After supper, most of the students unpacked and were ready for bed, excited in anticipation of the first day of skiing.

When we awoke after a good night’s sleep, the temperature still felt hotter than the Caribbean. The need for sun cream was certainly not dismissed so the students all ensured that they were set up appropriately ready for their first day skiing. Mr Stephens’ Group (Seniors) set-off first to meet their instructors where they were tested and put into groups based on ability. Mr Cannon’s Group set-off five minutes later to also meet their instructors. Almost all groups (aside from expert groups) spent the morning down on the ‘DinoJet Blue Run’ to learn the way of Eddie the Eagle. 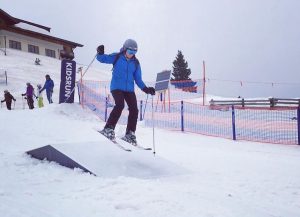 By day three, the temperature had dropped slightly and we had some snowfall on top of the mountains. This provided us with a little more powder to work with for the expert groups. Although the students had a fantastic tan they wanted to show off, they definitely needed to wrap up warm the second half of the week.

Despite the challenging conditions on the fourth day, they overcame these tests and all groups were up top and tackling ‘Spacejet’ 1 and 2 at 1674m, and ‘Starjet’ 3 at 1881m. This made myself, Mr Slater, and Mr Stephens extremely proud, puts everything into perspective and makes it all worthwhile. All groups at the top of the mountain on day four, truly astonishing progress. 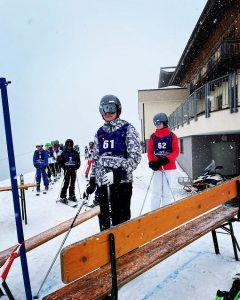 By the end of the week the students were still full of excitement and happiness, enjoying the excellent skiing available to them during the day and then the evening activities. One of the greatest pleasures of the Ski Trip experience was the students getting to know their Ski Instructors. The students really looked up to the ski instructors and created a bond that the students will never forget.  For their part, the instructors were full of praise for the students and remarked how well behaved and determined they were to get back up and learn.

All groups enjoyed participating in the ‘Slalom Ski Race’ by flying down the mountain as fast as they could. Here we saw the entire group competing against each other through healthy competition. Awards, medals and prizes were given at the ceremony on Thursday night, where the instructors also joined us. However, the fastest slalom racer award goes to George. 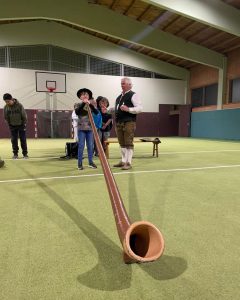 We introduced the culture of après ski to the students by visiting the restaurant on the slopes to allow them to unwind and discuss their morning and afternoon skiing. This also gave them the opportunity to discuss the infamous ‘Donut of the Day’ and ‘Legend of the Day’. Après ski dinner was provided by the fabulous catering staff each evening. Evening Entertainment also included Laser Swimming, Dachstein Glacier Walk (at 2700m), Austrian Skittles, Tobogganing, Austrian Folk Dancing, Presentation Night and Disco Night – all of which enabled the tour to embrace the ethos of the Austrian culture.

There has been an overwhelming amount of compliments given to us by our ski instructors, travel operator, parents, hotel managers, kitchen staff and even local Austrians. Leweston School students were wonderful role model citizens with their exemplary behaviour and attitude. Mrs Simkins-Smith, Miss Thorne, Dr. Greenway, Mrs. Vandyck, Mr Slater, Mr. Stephens, Mrs. Dencher, Mr. Barlow, Mr Griffiths, and every student, helped make the tour a success and it makes me proud and honoured to see them looking out for each other and making new friendship groups.

I want to thank everyone that was involved in the organisation of the trip, particularly the School Secretary, the Bursary, our Receptionists and the Parents. The trip would not have been possible without them. I am already looking forward to our next ski trip, hopefully in 2024. Details will be released within the next academic year. 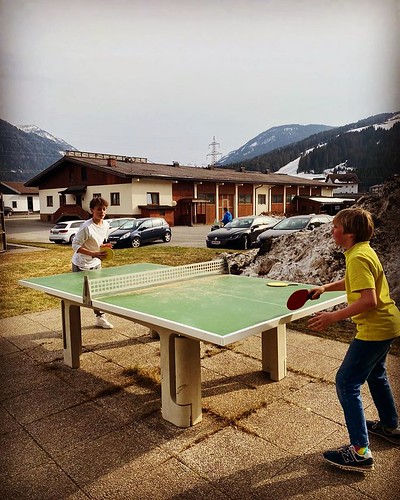