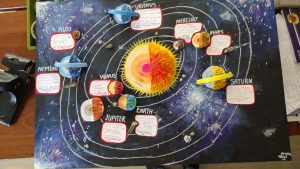 Physics Teacher, Mr Nejako, set his Year 9 students a physics research project. It could be anything they wanted, as long as it related to Physics. It could be presented in any manner the pupils wished, and then Mr Nejako set them loose to work independently on this project.

Amelia B, created a  spectacular 3D piece about space, in particular planets. Amelia stated some facts about each planet such as its dimensions, orbital and rotation period.

Imogen B, composed a fantastic video all about ‘Time’. She said “I chose to base my project on time because I think it is an extremely interesting concept which despite being briefly explained to me a few times, I had never really understood. Therefore, I thought this would be a great opportunity to do some research on it. I also think time is an difficult concept to defy and I was interested in how it had been thought about throughout history.”