Congratulations to Alice M, Prep 6, who won the National Competition from Leonardo after designing livery for the AW149 (Leonardo’s latest generation multi-role helicopter) whilst sharing details on how their design would help perform its role.

Alice’s design was praised for its creativity, as well as the bright and bold colours that played a practical role to aid the helicopter perform it’s rescue missions – with distinctive green and blue colours to make it instantly recognisable and resulting in speeding up the rescue mission.

Science Teacher, Mrs Le Poidevin said “The students really enjoyed designating their AW149s. We has a very diverse set of entries, including a ‘Pet Rescue’ version. The students could not believe that someone from their school had actually won!”

As a result on winning, Alice was awarded with £500 of book vouchers for her school and was presented with a model of the Leonardo AW149 helicopter from STEM Ambassadors, Jordan Goble and Charlea Boucher.

Jordan and Charlea also delivered an engineering presentation to Prep 6 and were delighted to receive such an enthusiastic response as the pupils learnt about transportation and how it can be used to export things such as a toothbrush as well as the diverse life of an engineer.

Alice has already said this has made her want to design more thinks in the future! 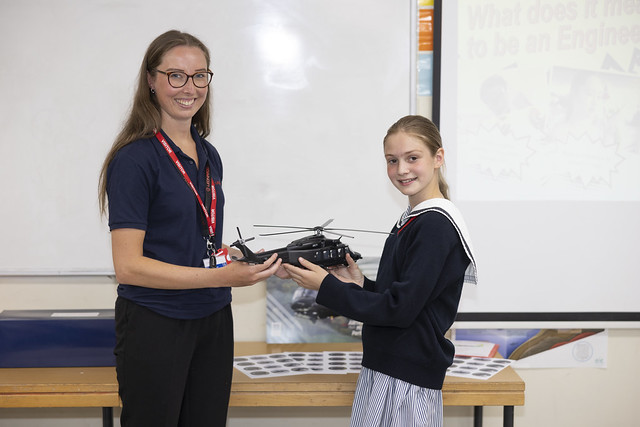