You are here: Home » Prep » Outside the Classroom » Equestrian

Leweston is gaining a reputation as a serious competitor in equestrian sport and pupils of all ages regularly compete at NSEA events. In 2019 the school won the National Schools Equestrian Association (NSEA) Regional Points League for the fourth year in a row, gaining the most points of any competing school in the country.

Leweston has 27 students drawn from both the Prep and Senior Schools currently registered as competitive riders. They are competing in Dressage, Show Jumping and Eventing. There are also 12 Equestrian Scholars who are mentored by the Equestrian Team Manager, Lorraine Roberts, who promotes equestrianism as a sport across the School.

Leweston is an NSEA affiliated school and hosts its own NSEA Inter-Schools RPL and Grass Roots Show Jumping Competition every September with a one-day event at BE Bricky in October in conjunction with the Pony Club. All our riding events are run under each governing body’s national rules, British Show Jumping, British Eventing, British Dressage. There is a natural progression from grass roots school competitions to National and International level with talented riders individually mentored by the equestrian team manager and academic staff who understand the time and dedication needed to ride at top level. 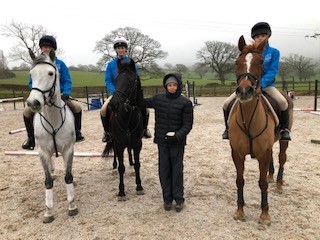 Emma Fisher during a training session with Leweston riders